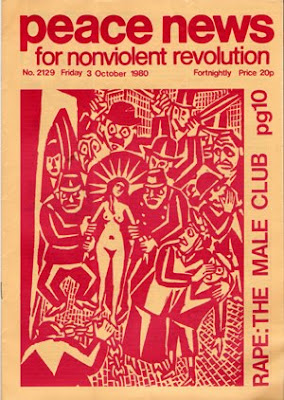 Workshops and sessions at the Peace News Winter Garhering

SATURDAY
Aldermaston Big Blockade
The Aldermaston Big Blockade is designed to highlight the illegality, immorality and criminal waste of resources involved in the multi-billion pound expansion of the nuclear warhead factory in West Berkshire and the wider Tridentre placement programme. The blockaders are aiming to put a stop to the developments and begin the process of disarmament. This workshop will provide some background on the developments at Aldermaston and the Trident
replacement process, and focus on preparing for the Aldermaston blockade on Monday 15 February.
Dan Viesnik is a member of Trident Ploughshares.
http://www.tridentploughshares.org/article1577
EDO Decommissioners
In January 2009, with bombs still falling in Gaza, five activists entered the EDO/MBM/ITT factory in Brighton and caused £300,000 worth of damage. One is still on remand in prison, others face strict bail conditions. What motivated them to do it? What impact do they feel it had? A chance to explore large scale actions and their impacts.
One of the EDO Decommissioners will speak at this workshop.
http://decommissioners.co.uk/
Engaging with decision-makers
A new Network for Law, Accountability and Peace (NETLAP) recently organised a two-day conference involving lawyers, academics, politicians, analysts and activists to help develop a structure for developing activists’ contacts withParliamentarians and Whitehall officials so that they are more open and informative for us.
George Farebrother is the coordinator of World Court Project UK, which helped to bring the issue of nuclear weapons to the World Court in 1996, resulting in a historic legal ruling.
http://www.peacebourne.serifweb.com/NETLAP/
Food Not Bombs
Keith McHenry is the legendary co-founder of Food Not Bombs, on a speaker tour of the UK. In 1980, Keith and seven friends started the first Food Not Bombs chapter in Cambridge, Massachusetts, providing entertainment and vegetarian meals in Harvard Square and the Boston Commons after making deliveries of uncooked food to most of the housing projects and shelters in the area. Keith has been arrested over 100 times for serving free food in city parks and has spent over 500 nights in jail. On a personal level, Keith suffers extreme pain every day from fibromyalgia caused by police violence and regularly sees a doctor for medical care.
http://www.foodnotbombs.net/keithbio.html
Hiroshima art
The Hiroshima Panels (原爆の図, Genbaku no zu) are a series of 15 painted folding panels by the collaborative husband and wife artists Maruki Iri and Maruki Toshi completed over a span of 32 years (1950-1982). The panels depict theconsequences of the atomic bombings of Hiroshima and Nagasaki, as well as other nuclear disasters of the 20th century.
Emily Johns, Peace News co-editor, received her art education at the John Cass and Goldsmiths College, both in London. She has been a professional artist, focusing recently on print-making, since 1991.

How to set up a housing co-op
Housing co-operatives offer a chance for people to take control of their own lives and provide a base for activists to engage in radical activity. They are a constructive example of what we can achieve and proof that there are alternative ways of living to the competitive model pushed under capitalism. Come and learn more about housing co-ops, how they work, and how to set one up.
Radical Routes is a co-operative of social centres (including the Sumac Centre), workers and housing co-ops working towards radical social change. The network operates through consensus and mutual aid.
http://www.radicalroutes.org.uk/
Improving facilitation
If you’ve been facilitating meetings for a while, and would like to acquire new skills or techniques, learn about facilitating larger meetings, or reflect on what you’ve been doing with other facilitators, this is the workshop for you. This is not an introductory workshop. It is an opportunity for experienced facilitators to reflect, and to improve their facilitation skills.
Seeds for Change offers workshops and training to grassroots action groups to help them organise for positive social change.
http://www.seedsforchange.org.uk/
Killer drones
Increasingly the military are using automated systems in their vehicles and weaponry. Predator drones have been used in Afghanistan, Pakistan, Bosnia, Serbia, Iraq, and Yemen. What are unpiloted aerial vehicles (UAVs)? How can we end their use? The campaign starts here.
Chris Cole is director of the Fellowship of Reconciliation, and Jim Wright is an active member of Hastings Against War.
No Borders – Where next after Calais?
In June 2009, No Borders activists from the UK held a camp in Calais to highlight the plight of migrants living in “refugee camp” conditions in “the jungle” there. Most of the migrants - from countries such as Afghanistan, Somalia and Eritrea - were hoping to enter Britain, sometimes by smuggling themselves into lorries. No Borders is a network of groups struggling for the freedom of movement for all and an end to all migration controls.
http://noborders.org.uk/
NVDA training
A Nonviolent Direct Action (NVDA) training for people who are considering taking part in nonviolent direct action and/or civil disobedience. Includes a legal briefing for low-risk actions, a chance to practice some simple action techniques and to think about the pros and cons of taking part in direct action. Particularly useful for those intending to take direct
action at the Big Blockade at Aldermaston in February.
Seeds for Change offers workshops and training to grassroots action groups to help them organise for positive social change.
http://www.seedsforchange.org.uk/
Radical climate activism: Where next after Copenhagen?
December 2009 was meant to be the month when climate activists from around the world descended on the climate talks in Copenhagen and altered the course of climate destruction. So what happened? This session will be a chance to explore the events of last December and look at where the climate movement could be going next.
http://www.climatecamp.org.uk/actions/copenhagen-2009
http://www.climate-justice-action.org/
Screen-printing
A hands-on workshop with Shonagh from Faslane Peace Camp.
Strategies for campaigning against the war in Afghanistan
After nearly a decade of occupation, both the US and Britain are engaged in escalating the war in Afghanistan. What are the opportunities today for peace in Afghanistan? How can we turn the withdrawal majority in Britain into a real force for change? What role can civil disobedience play?
Gabriel Carlyle, Peace News promotions worker and reviews editor, has been involved in a number of anti-war groups, including Voices in the Wilderness UK since 1998. He was recently on trial at Watford Magistrates Court for protesting at the Afghanistan command centre in Northwood, North London.
http://www.stopbombingafghanistan.org/

SUNDAY
Anti-Militarist Network feat. Notts Anti-Militarism
Formed in 2008, the Anti-Militarist Network is a non-hierarchical, UK-wide network of autonomous campaigns, groups and activists opposed to militarism and the arms industry. These groups, including Smash EDO and Faslane Peace Camp, believe in the necessity of direct action but support a variety of tactics. This talk aims to publicise the Network with a particular focus on the local group Notts Anti-Militarism. The second half of this session will look at the tactics they have used, and will guide you through launching a similar campaign, how to find arms companies in your local area and how to research their dealings.
Notts Anti-Militarism launched the Shut Down Heckler and Koch campaign in 2008 and has been continuously campaigning ever since. They are also both founding and currently active members of the Anti-Militarist Network.
http://www.antimilitaristnetwork.org.uk/
http://nottsantimilitarism.wordpress.com/
Arms and arguments
“Well, of course in an ideal world…” Those involved in anti-arms trade work all know how difficult it can be to deal with all those sensible sounding arguments in favour. This workshop looks at strategies for debating the issues and how to refute common pro-arms trade arguments.
Kirk is a member of Notts Anti-Militarism and has been active in the Shut Down Heckler and Koch campaign since it started in 2008.
Chomsky and revolution
This workshop provides a whistle-stop tour of Chomsky’s ideas, with particular focus on his ideas for Revolution. This workshop does not assume any previous knowledge of Chomsky; Chomsky sceptics also welcome.
Milan Rai, Peace News co-editor, is the author of Chomsky’s Politics (Verso, 1995), contributed to the Cambridge Companion to Chomsky (Cambridge University Press, 2005) and is on the editorial board of the Journal of Chomskyan Studies.
http://chomsky.info/
Peace News Summer Camp 2010
If you would like to be involved in organising this year’s glorious Peace News Summer Camp (23-27 July, Oxfordshire), please come to the first organising meeting!
http://www.peacenewscamp.info/
Prison reform
What are prisons like at the moment – and how could they be improved?
Nottingham Student Peace Movement organiser Hicham Yezza shares his reflections on prison reform - based partly on his five months in prison during 2009.
http://www.prisonreformtrust.org.uk/
http://freehicham.co.uk/
Solidarity with Palestine: where next after the Gaza Freedom March?
In the winter of 2008-2009, the Israeli state launched a 22-day assault on Gaza provoking outrage worldwide. In winter 2009-2010 over a thousand activists from across the world headed to Egypt to join a Palestinian march inside Gaza protesting at the Israeli siege. This workshop will give you a chance to hear feedback from participants and think about where next for Palestinian Solidarity.
Two British participants in the Gaza Freedom March will share their experiences and their thoughts.
http://www.gazafreedommarch.org/
http://starhawksblog.org/
Students’ anti-arms trade activism
Military organisations - including arms companies and the Ministry of Defence - annually sponsor hundreds of projects at UK universities. Furthermore, many UK universities and colleges invest in arms companies, often without the knowledge or approval of their students, staff and beneficiaries. Speakers from Campaign Against Arms Trade and from Nottingham Student Peace Movement talk about campaigning on campus against the arms trade.
http://www.caat.org.uk/campaigns/universities
Publicada por Incógnito à(s) 17.1.10