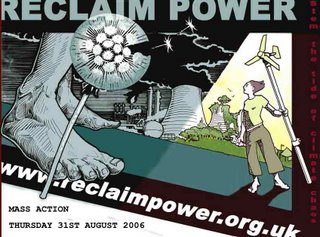 Climate change is the greatest threat to ever face humanity and its happening now. Governments and big business dream of continued economic growth so won't deal with the crises. What we really need is a fundamental shift in the way we live - AWAY from consumer society, continued economic growth and power concentrated in the hands of the few. TOWARDS locally based, grassroots, community solutions.
.
But we can!
Join us for action!
.
Climate change and the depletion of oil mean an end to industrial society, of that we have no choice. Our only choice is when to make the change, and what society we create instead. Do we want industrial collapse to be war, famine, hurricanes, droughts & floods, or a new society based on co-operation and local community solutions to all our problems?
.
Visualise Industrial Collapse
.
With this action, we will reclaim power over our future and take concrete, positive action against climate change. We will send out a strong signal inspiring people to join us in changing the way we live. Reclaim Power will involved thousands of people taking action at a major industrial contributor to climate change. It will send out a strong signal that we urgently need to take radical action to survive.
What are you waiting for...?
.
Help us stem the tide of climate chaos. More info will be posted on
www.reclaimpower.org.uk
.
Reclaim Power is part of the
Camp for Climate Action, 26th August-4th September 2006, to create grassroots solutions to climate change through action, education, networking and skill-sharing.
www.climatecamp.org.uk
Publicada por Incógnito à(s) 22.5.06