About the artist
State Britain is Wallinger's first major project in London since Ecce Homo 1999, one of his most celebrated works to date, a modern day, life-size Christ figure crowned with barbed-wire thorns that temporarily occupied The Fourth Plinth in Trafalgar Square, London.
Wallinger was born in Chigwell in 1959. He lives and works in London. He studied at Chelsea School of Art, London (1978-81) and Goldsmiths’ College, London (1983-85). Since the mid-1980s Wallinger’s primary concern has been to establish a valid critical approach to the ‘politics of representation and the representation of politics’ and has often explored issues of the responsibilities of individuals and those of society in his work. He was shortlisted for the Turner Prize in 1995 and represented Britain at the 49th Venice Biennale in 2001 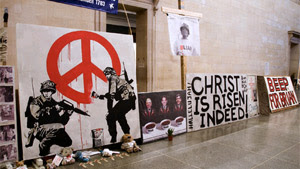